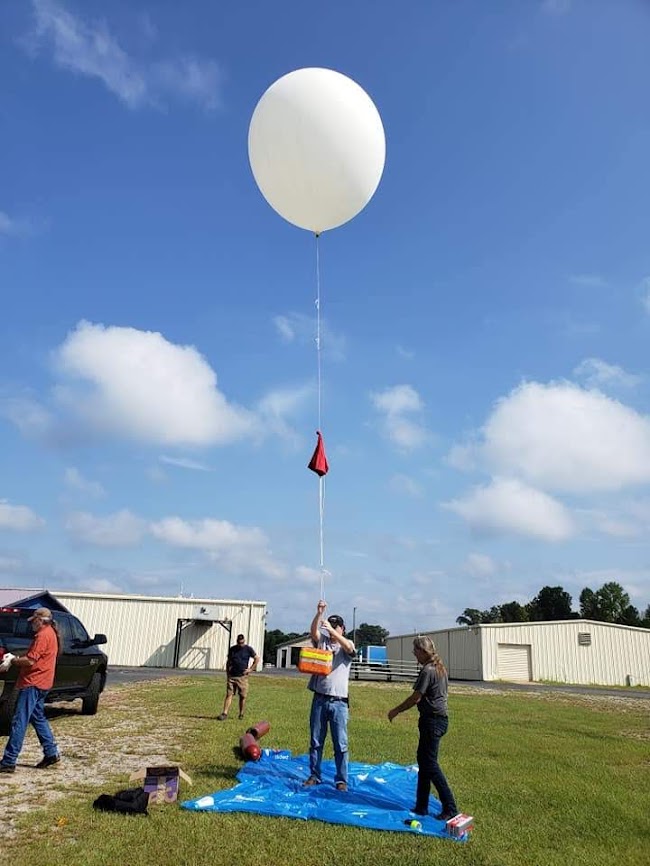 It's that time of year again. The West Georgia Amateur Radio Society will be launching a weather balloon on June 19th from the VFW Fairgrounds in Carrollton. We will plan to meet at 9 AM to begin preparation and launch whenever we are ready.

The balloon will carry a device transmitting APRS data so we can track its position and altitude in real time. Because it will be received by stations that can then port the data to the APRS-IS network, you can watch the balloon's progress along with us at this link. It will also carry a crossband repeater so we can communicate with each other through the balloon as it flies. It's always a good idea to get your antenna as high as possible for the best range. How about 20 miles high? :)

Before we launch, we will have a very good idea of what the balloon's specific path will be on that day. We obtain this information by using the Cambridge University Space Flight Predictor. We will have a briefing in the morning and then the chase will begin. Although weird weather patterns have been making the predictions sporadic, I believe the balloon will land in Alabama.

Launch day is here! We will be meeting at 9 AM at the VFW Fairgrounds (1625 Bankhead Highway, Carrollton GA). We plan to launch around 10, or whenever everything is ready. See this link for the current flight prediction. Keep in mind that varying ascent or descent rates will stretch or compress that part of the path, but the general shape of the flight prediction is what to watch. Take a look at the predicted burst point and landing site. The distance between them is 3.035 miles, and the heading from burst to landing is 230.58 degrees. Once we know the actual burst point, we can get very close to the landing site before it lands by using this tool to calculate that point based on distance and heading.

You can track the balloon on aprs.fi here. In that link, I've set the track tail length to three hours to cover the whole flight. If you would like a way to track the balloon alongside the prediction on your mobile device, you can click here, save the KMZ file to your device, and open it in the Google Earth app.

This event has been canceled due to weather until a date yet to be determined. Watch this space for updates

Once again, the West Georgia Amateur Radio Society is planning to launch a pico balloon. A pico balloon is one that can travel thousands of miles, and even around the world, with a very small payload that transmits the balloon's location. Ours will be using WSPR on 20 meters.

One major difference between the upcoming flight and the last one is that we'll be using an SBS-13 balloon from Scientific Balloon Solutions instead of a mylar party balloon. The major benefit is that this is a super pressure balloon designed to last longer. I have recently read of other flights of this type that made four laps around the earth.

Another difference is that we will be using hydrogen. This will allow us to achieve the same amount of lift with a lower gas volume. This will put less of a strain on the balloon.

Launch is scheduled for the morning of March 14th, but weather forecasts are not looking good. We'll have to see what happens as the date gets closer.

On September 14, 2019, the West Georgia Amateur Radio Society launched a high altitude weather balloon from the VFW Fairgrounds in Carrollton, GA. This was our second weather balloon launch this summer.

Because we wanted to have a camera facing down we had to use a new payload container. This one seemed to be a good bit thicker, which added to the weight. Read on to see how that became a factor. This payload also included the APRS tracker and crossband repeater, both designed and built by WX4BK. It also included sensors to measure and log internal and external temperature, humidity, barometric pressure, UV, and G forces.

This is where it gets interesting. Even though the helium tank was the same physical size as before, we were told that it held 250 cubic feet of helium. We'd used it on the last flight. Assuming that it really held 250 cubic feet, we should have had enough for this flight. I should have gone with my gut instinct that it held 219 cubic feet. We inflated the balloon, tied it off...and discovered that we did not have enough helium to lift off. KM4UPX came to the rescue by getting a tank of helium from the First Christian Church in Carrollton. I continued with inflation until I got 5 pounds of weight neutrally buoyant, assuring that we would have an ascent rate around 1,000 feet per minute.

Once again, things inside the payload got really hot. When I picked up one of the cameras at the landing site, it was too hot to hold. We had some problems with sensors dropping out or reporting incorrect data. I'm wondering if heat was the cause. The crossband repeater was another mystery. It worked on the ground, but was sporadic in the air. Brian thinks one side may be desensing the other, but it's interesting that the problem doesn't always happen. The APRS functionality worked perfectly through the flight.

Once again, recovery was an interesting experience. Referring to Alabama county roads as "roads" is a bit of a stretch.

You know it's an interesting "road" when you have to get out of the truck to plan your route through that section and see if it's even possible. At one point, KK4OHF and I had to stop and wait for goats to cross the road.

At the landing site, I stayed with the truck and monitored the radio as the teams set out through the scrub and thorn bushes. I had planned to take my drone up to survey the site and potentially spot the payload. I did get it up in the air, but had a moment of panic when my tablet, which I was using to control the drone, had a thermal shutdown while the drone was in the air. Fortunately, the drone descended, and I hand caught it. Shortly thereafter, I heard cheering in the distance and confirmed on the radio that they had located the payload and were in the process of trying to recover it. It had landed across a creek in some scrub brush. The guys watched as a member the self proclaimed "girls team" waded across the creek and pulled the payload down. Upon examining the footage from both cameras, I discovered that we had apparently bumped the record button on the downward facing camera and turned it off just as we were putting it into place. It's an easy mistake to make. We'll just need to cut more of a slot in the payload to leave room near that button. All in all, I think it was a completely successful flight. The APRS worked flawlessly, everyone had a blast, and we recovered the payload soon after landing. Not only that, but we once again caught burst on video.